The Seventh of the 12 Antique Coins 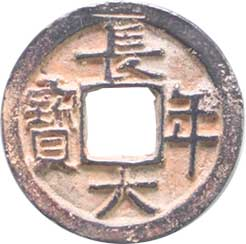 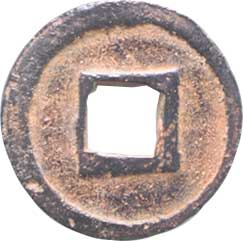 The seventh coin of the Japanese 12 Antique coins was called the Chonen Taiho (長年大宝). In 848, the 15th year of Showa, the emperor decided to declare a new era to alleviate an upcoming flood/natural disaster that was predicted by the court astrologer. This new era was called Kasho, which roughly means Praising Good Luck according to Munro. As usual, with the new era came a new currency: the Chonen Taiho. First issued in October of 848, the Chonen Taiho was released at the perfunctory rate of one new coin to ten old coins. The name translates roughly to "Great Treasure of Many Years" (according to Munro). However, despite the hopes placed on the era change and new currency, a great famine still occurred in 849, but at least the government was able to distribute half a million pieces among the poor. As with the sixth coin, there are large (Ogata) and smaller/normal (Futsu) varieties. These are further subdivided into some calligraphic varieties. In total, Munro lists three, Jones lists five, and Hartill and JNDA list two. Despite the optimistic name, these Chonen Taiho remained in circulation for just ten years until 858.