The Eigth of the 12 Antique Coins 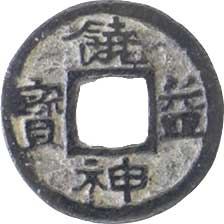 (From left to right, top to bottom) This Nyoyaku Shimpo is the small variety. It sold at auction for nearly $13700 after premium. These coins are exceedingly rare and less than one sells per year at AuctionWorld. Photos sourced with permission from AuctionWorld

First released in April 859, during the first year of the era Jogan, the Nyoyaku Shimpo (僥益神寳) is the rarest of the twelve antique coins. These coins were issued under the rule of Emperor Seiwa, who reigned from 858 until 876. During the tenure of this coin until 870, the government issued many decrees and laws restricting the use of copper and coins due to an ever decreasing supply of copper and quality thereof. In fact, gifts of copper to the mint were encouraged, and fines were paid in copper as well. At the same time, These coins were diminutive in size and quality when compared to their predecessors due to this as well, and some issues were cast so badly as to barely be recognizable. The average diameter and weight was 19-20mm and about 2 grams, respectively, which is significantly smaller than previous coins. In addition, the public and merchants rejected more than a quarter of the released currency due to imperfections with it, triggering the emperor to issue a decree stating the those who did not accept the currency could be punished. Denominated at the usual 10 to 1 ratio to previous coins, the obverse has the usual four characters and the reverse is blank. The inscription, written by the court minister Kasuha Utsugu, reads Nyo Yaku Shim Po (or Nyo Eki Jin Ho), which translates roughly to “Divine treasure of abundant profit” according to Munro. The irony of this inscription is evident, considering their diminished quality. As before, the two main varieties pertain to size, and there are several calligraphic varieties as well, most notably one with the character Shin offset to the right. Cast from 859 until 870, the eighth of the twelve antique coins, the Nyoyaku Shimpo, signifies the turning point in the decline of this series of coins.